In the tor yu, the hands draw out the spine - as the body sends out the hands.
To better understand this interplay, let's examine further the whole body continuities that tether the upper limbs to the rest of the body.
You recall that last time we examined the lines of pull created by the muscles, tendons and bone that allow us to bend and straighten at the wrist and elbow. We saw that the contraction of any given line was associated with the lengthening of another.
And we observed that, because the shoulder and upper limb are especially designed for mobility, multiple myofascial lines are required to interact with one another, each constantly shifting the role it plays - sometimes shortening, sometimes allowing itself to elongate and become taut. The body employs multiple big tendons in different ways and all at the same time.
Thomas Myers in his book Anatomy Trains describes four lines of pull that arise, shift and interact in the upper limb as we move. Two of these lines run along the front of the arm and two others along the back. As you peruse the drawings, look not for detail but for a sense of how these pathways take the upper limb and hook it up with the torso as we move through the set. [caption id="attachment_2126" align="aligncenter" width="500"]

Fig 1 Four pathways of connection in the arms described by Thomas Myers. Two are situated at the front and another two at the back; they all connect the upper limb with the torso. Myers, page 148[/caption] Some observations about these lines Let's look at three of the central structures with which the hands connect: the pectoralis major, the latissimus dorsi and the pectoralis minor. Pectoralis Major Broad and powerful, this muscle twines about itself as it runs from the medial half of the collar bone, the sternum and the cartilage of the first 6 ribs over to the upper humerus, eventually connecting with the front of the hand by a transmission line of muscle, tendon, fascia and bone. Functions of the muscle itself include drawing the arm in toward the side (adduction) and the front of the body (flexion). [caption id="attachment_2128" align="aligncenter" width="300"]

Fig 2 The pectoralis major with its three segments starts off from the collar bone, breast bone and the upper 6 ribs, and then travels over to the upper humerus. Biel, page 97[/caption] This next image brings to mind the fourth arm foundation exercise, and the links that form between the two hands as we rise up and open in Brush Knees. [caption id="attachment_2130" align="aligncenter" width="500"]

Fig 3 The pectoralis muscles act as a bridge between the two hands. Myers, page 156[/caption] Latissimus Dorsi The latissimus dorsi has extensive proximal attachments with the torso: the spinous processes of the sixth thoracic to fifth lumbar vertebrae (T6-L5), the sacrum, the posterior iliac crest, the thoracolumbar fascia, the lower 4 ribs and the inferior tip of the shoulder blade. Spiralling as it approaches the arm, the latissimus grabs hold of the anterior upper humerus right beside the insertion of the pectoralis major. Like the pectoralis major, it too eventually links up with the front of the hand. Among other things, this muscle serves to draw the arm in and back behind the body. [caption id="attachment_2129" align="aligncenter" width="279"]

Fig 4 The latissimus dorsi ties the hand into the spine, sacrum, iliac crest, ribs and the tip of the scapula. Biel, page 79[/caption] Because the hand eventually makes fast to both the pectoralis major and the latissimus dorsi, it can connect powerfully with the torso. [caption id="attachment_2131" align="aligncenter" width="500"]

Fig 5 By connecting with both the latissimus dorsi and pectoralis major, the upper limb clasps the chest. Put another way, the torso grabs hold of the upper limb with "both its hands". Myers, page 156[/caption] Pectoralis minor The pectoralis minor sits on the rib cage, deep to the pectoralis major. It runs from the 3rd, 4th and 5th ribs up to the coracoid process, an anterior projection of the scapula used to attach ligaments and muscles. As a result, this muscle contributes to the already very mobile life of the shoulder blade by drawing it laterally along the posterior chest wall and tilting it anteriorly. As we saw in the Deep Front Arm Line, the pectoralis minor ties the thumb to the front of the chest. [caption id="attachment_2132" align="aligncenter" width="296"]

Fig 6 The pectoralis minor lies deep on the chest wall and helps to connect the thumb to the shoulder blade and chest. Biel, page 100[/caption] The artery, vein and nerves serving the upper limb pass underneath the pectoralis minor. Our keeping this muscle supple, preventing it from shortening and crowding the space beneath, helps avoid compression of the neurovascular bundle as it makes its way into the arm. [caption id="attachment_2133" align="aligncenter" width="297"] 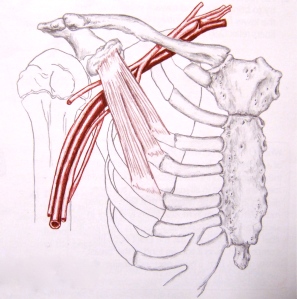 Fig 7 The axillary artery and vein, lymph vessels and the nerves of the brachial plexus require sufficient space as they pass under the pectoralis minor if their function is not to be compromised. Biel, page 100[/caption] So, multiple channels of potential connection run from the upper limb to various regions of the chest, scapula, spine and head. Using our hands, wrists and elbows with the right intention activates these various pathways in a manner that contributes strength, balance and ease to our movements.  Too little intention and connection is not established. Too much and the body tenses; we lock into one line of pull and find it difficult to shift into others. Next time, we will see how the whole body continuities are completed as the torso joins with the pelvis and lower limbs. Hands linked to trunk, head and feet. 1. Kinesiology of the Musculoskeletal System, Foundations for Rehabilitation, 2nd Edition, 2010, Donald A. Neumann, Mosby Elsevier, ISBN 978-0-323-03989-5 2. Trail Guide to the Body, 3rd Edition, 2005,  Andrew Biel, Books of Discovery, ISBN 0-9658534-5-4