In practicing our art, one of the things we discover is the steady rhythm of the body as it turns up and then down. Surprisingly, we also learn that attending to the placement of the hand and elbow helps us acquire that rhythm. We will focus today on the elbow-forearm complex, its anatomy and its functions, to better understand how the hand and elbow assist with the cadence of the whole body as we move. This complex is composed of three bones - the humerus coming down from the arm above, and the radius and the ulna of the forearm. Four joints grant movement to the assembly: the humero-ulnar and humero-radial joints at the elbow and the proximal and distal radio-ulnar joints. As you study the images, remember that you only have to click on a drawing to enlarge it. [caption id="attachment_1846" align="aligncenter" width="220"]

Fig 1 The elbow-forearm complex with its three bones and four joints. Neumann, page 174[/caption] Now, the elbow-forearm complex has two distinct functions. We make constant use of both: Flexion and Extension The elbow is primarily a hinge joint constructed to flex and extend. We'll examine this function first. [caption id="attachment_1847" align="alignnone" width="300"]

Fig 2 Extension on the left, flexion on the right. Kapandji, Volume 1, page 99[/caption] One of the forearm bones, the ulna, represents a major structural component of the elbow joint. Along the back surface of its expanded upper end, we find the large, blunt olecranon process or the point of the elbow. Paying attention to the placement of this point as we do the set reveals our use of the ulna and alters how we involve quite distant parts of our anatomy. More on this later. The front aspect of the upper ulna, shaped like a jaw, grasps the bottom end of the humerus and creates the humero-ulnar joint. This joint allows the elbow to bend and straighten and, at the same time, provides great stability. [caption id="attachment_1876" align="aligncenter" width="197"] 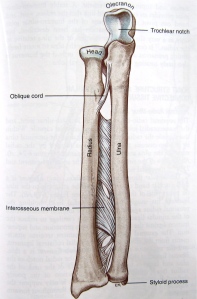 Fig 3 The right forearm seen from the front. The enlarged upper end of the ulna grips the humerus above. The interosseous membrane binds the bones to one another. Neumann, page 185[/caption] [caption id="attachment_1877" align="aligncenter" width="208"] 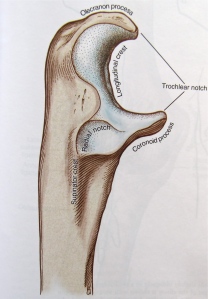 Fig 4 A view from the side of the top end of the right ulna, demonstrating its vise-like shape at the front and the tip of the elbow at the back. The radius has been removed but we see the notch where it articulates with the ulna. Neumann, page 177[/caption] [caption id="attachment_1857" align="aligncenter" width="500"] 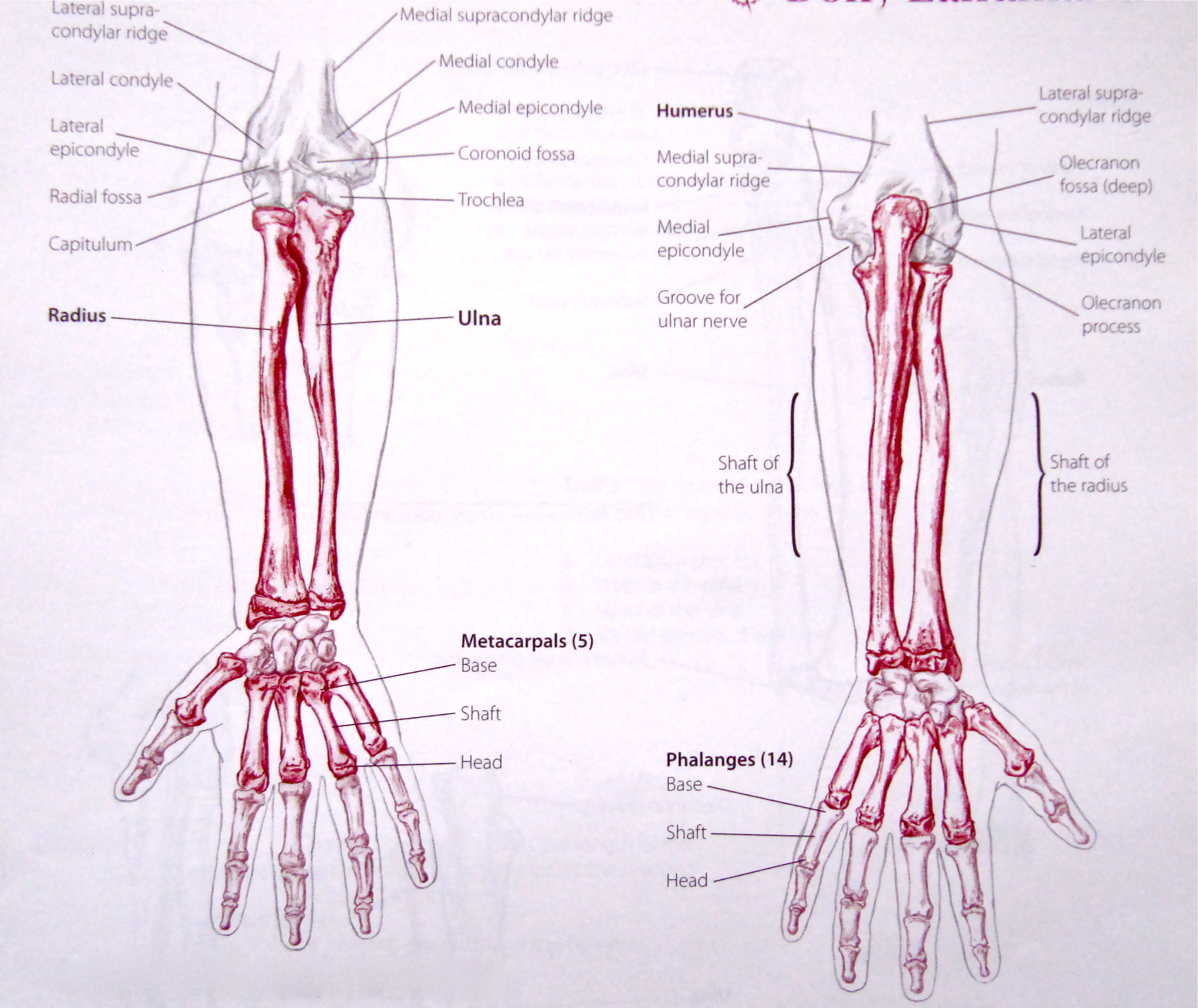 Fig 5 On the left, the right forearm and hand seen from the front. On the right, a view from the back. Notice how the back of the ulna reaches up and grasps the upper arm. Biel, page 119[/caption] [caption id="attachment_1850" align="aligncenter" width="500"]

Fig 6 An outside (lateral) view of the right elbow held in 90 degrees flexion. There's lots of detail here but simply note how the C-shaped upper end of the ulna forms the tip of the elbow, the olecranon. This is the structure we often struggle to keep down as we send out the hands. Netter, Plate 436[/caption] Supination and Pronation So, we've seen that the ulna's grip on the humerus gives the elbow strength and makes bending and straightening at the elbow possible. However, the usual movements of the elbow-forearm unit typically involve more than simple flexion and extension. To be sure, with the tor yu for example, the elbows flex coming back and extend going out. But the forearms are also rotating without drawing the tips of the elbows in or out. And with the don yu, in addition to flexion and extension at the elbows, the palms turn up and down while the elbows remain quiet. This added function of the elbow-forearm assembly is called supination-pronation. Rotation of the forearm while keeping the point of the elbow still and without disturbing the shoulder joint. Some examples from our practice: the first arm foundation exercise, "offering tea" as you send out the hand in Parting Wild Horses Mane,  holding the ball in all its versions in the set,  and Wave Hands Like Clouds. [caption id="attachment_1874" align="aligncenter" width="300"]

Fig 7 On the left, supination of the forearm; in the middle, neutral position; on the right, pronation. Kapandji, page 107[/caption] Given its grip on the humerus, the ulna cannot perform this function. Any turn it makes perturbs the tip of the elbow, draws the upper arm towards or away from the body and disturbs the shoulder joint. The solution: add a radius to the forearm. Let's see how that permits rotation. As we saw in figure 3 above, the upper end or head of the radius is small and round and makes little structural contribution to the elbow. It is beautifully designed, though, for rotation about both the capitulum of the humerus (the humero-radial joint) and the upper ulna (the proximal radio-ulnar joint). Meanwhile, the distal end of the radius is enlarged both front to back and side to side so that it may connect strongly with the first row of wrist (carpal) bones. In addition, it rotates about the smaller lower ulna at the distal radio-ulnar joint. Notice how the lower end of the ulna makes no direct contact with the wrist bones; instead, it is separated from them by a mesh of soft tissue and cartilage. [caption id="attachment_1859" align="alignnone" width="236"]

Fig 8 The wrist bones attach only to the radius. Cartilage and other soft tissue is interposed between the wrist and ulna. Neumann, page 217[/caption] [caption id="attachment_1867" align="alignnone" width="300"]

Fig 9 Another view of the bottom end of the right forearm, this time with the wrist end down and tilted to reveal the articular surface of the radius. Note the grooves created on that surface by the wrist bones with which it comes in contact - the scaphoid and lunate. Once again, the ulna makes no direct contact with the bones of the wrist. Neumann, page 188[/caption] So, in review, we have: With this in mind, we can see how the radius and wrist represent the distal segment of the elbow-forearm complex. Together, they rotate around a fixed proximal segment made up of humerus and ulna. With the palm up, the radius and ulna lie parallel. As we turn the palm down, the radius, wrist and hand cross over the ulna to form an X. They do this without interfering with the elbow because the humerus and ulna are not obliged to turn. [caption id="attachment_1873" align="aligncenter" width="500"]

Fig 10 Front view of the right upper limb. Shown in brown is the distal segment of the elbow-forearm complex made up of the radius and wrist. The humerus and ulna represent the proximal segment and are drawn in yellow. The axis of rotation (dotted line) runs obliquely from radial head to ulnar head. As we turn the palm down, the radius and wrist cross over the fixed ulna. Neumann, page 187[/caption] Bit by bit, as we practice the Taoist Tai Chi® arts, we learn how to invite each element of the body to play its proper role in what is always whole body movement. Rotating the forearm with the elbow down engages the tissues of the upper limb yet leaves the shoulder quiet. This, in turn, allows a more balanced turn of the torso. We can feel this happening as we play at the tai chi. Understanding why it works this way comes as we study some of the ties that bind the upper limb and body together. More on this next time. 1. Kinesiology of the Musculoskeletal System, 2nd Edition, 2010, Donald A. Neumann, Mosby Elsevier, ISBN 978-0-323-03989-5 2. The Physiology of the Joints, Volume One, 6th Edition, 2007, A.I. Kapandji, Churchill Livingstone Elsevier, ISBN-13: 9780443103506 3. Trail Guide to the Body, 3rd Edition, 2005, Andrew Biel, Books of discovery, ISBN 0-9658534-5-4 4. Atlas of Human Anatomy, 4th Edition, 2006, Frank H. Netter, Saunders Elsevier, ISBN-13: 978-1-4160-3385-1